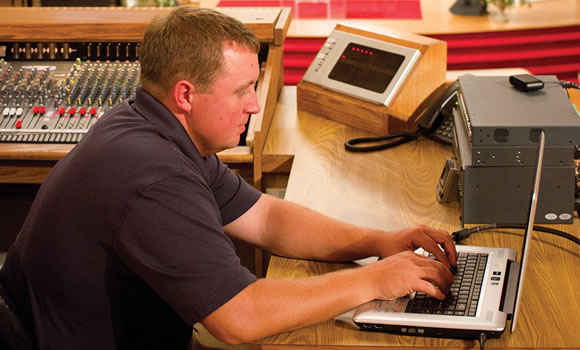 There was a time that, when a member of Trace Creek Baptist Church was sick or injured, ministers would add that information to the church bulletin so other members would know on Sunday.

Now that message gets out much faster.

“Facebook has turned into the best way to get things out there,” says Al Chandler, Trace Creek’s minister of children.

Churches big and small around the region are finding ways to use the Internet to communicate with their congregations and reach new people.

“The Great Commission says to get out the gospel to the whole world in as many ways as possible,” says Brent Lee, pastor of Hazel Baptist Church. “That’s exactly what the Internet does, and more churches should take advantage of it.”

And the ideas don’t stop with prayer requests: Congregations across West Kentucky and Tennessee are using their own creativity and WK&T’s broadband network to find new ways to reach people through technology.

At Hazel Baptist, Lee says broadband makes it easier for him to reach members of his congregation during the week rather than just on Sundays. He makes a point every morning to post a short scripture message on Facebook. “A lot of members will use that as their daily devotion,” he says. “It’s a way to get that daily encouragement out there. Even when you’re not coming into the church house, you’re still getting that encouragement.”

Both Hazel and the Hardin Church of Christ post sermons online so members who miss a service or who move away can download and listen at their convenience. “They’re able to hear the sermons and some of the Bible classes while they’re away,” says David Smith, an elder at Hardin. The sermon files can be streamed on computers or downloaded to MP3 players for listening on the go.

At Hazel, Lee posts videos of baptisms online. “Family members can just get on there and see their grandson or their niece,” he says. “There’s just no way you could upload that much information without broadband. It wouldn’t be feasible.”

Churches are putting broadband technology to work — to stay connected with their congregations and to reach out to their communities. 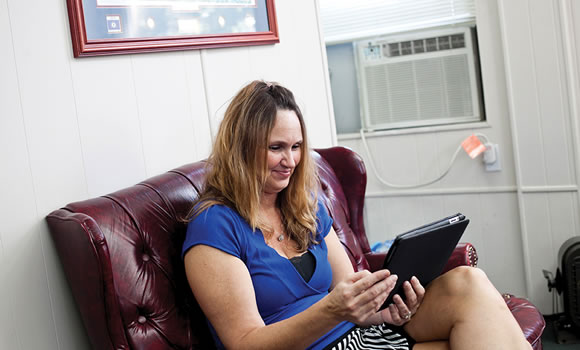 Alicia Tabers was excited to show her daughter the Christmas decorations she had set out around the house. As soon as Alicia saw her, she gave her a tour pointing out the trees, candles and other seasonal staples.

The only unusual thing is that Tabers and her holiday decor were just north of Murray, Kentucky, while her daughter, Sara Darnell, was 4,700 miles away studying abroad in Regensburg, Germany. Through video chat, Tabers took her iPad through her home to help Darnell get in the Christmas spirit.

“I took it around and showed her the Christmas decorations,” Tabers says. “She can see what’s going on rather than just me telling her about it.”

Tabers is one of a growing number of people using services such as Skype, Google Talk, FaceTime and Yahoo! Messenger to talk face-to-face with far-flung family and friends around the country or the world.

Tabers, who has WK&T’s cable, phone and Internet service at her store in Kirksey, Kentucky, says she expects those numbers will continue to increase. “I think if more people understood it, they would use it,” she says.

For instance, residents of Cunningham, Kentucky, can get faster Internet than workers and students in downtown Paducah.

Billy “Buck” Viniard, a Cunningham resident and WK&T member, says his home Internet speed is faster and cheaper than what is available to him at work in Paducah.

“I’ve been very, very satisfied with my fiber service, and I’ve recommended it to several people who are on something else,” says Viniard.

Throughout WK&T’s service territory, fiber is doing more than just building member loyalty and speeding up Internet downloads. Fiber is transforming the entire community. It’s furnishing teachers with the ability to teach with the Internet in their classroom. It’s providing new Internet-based jobs. And it’s increasing the speed and effectiveness of local emergency services. The possibilities fiber provides are only beginning.

Today, it’s hard to comprehend all the changes fiber will contribute to the community. So until then, perhaps the best support is given by current users, like Viniard. “I had a neighbor call and ask if I like my fiber service,” he says. “I just smiled and said, ‘I love it.’”

With a mobile device and a broadband Wi-Fi connection, residents of West Kentucky and Tennessee are staying connected with family members far and wide.

WK&T is building an advanced fiber-to-the-home network in the cities of Martin and Dresden, Tennessee. Check this website often to stay up-to-date on the project, and to learn more about the advantages of fiber internet service.